By the Book: Ken Burns

“What about ‘O Pioneers!’ or ‘My Ántonia’?” asks the documentarian and author of the forthcoming photo book “Our America.” “For that matter, what about Gabriel García Márquez? We do not have a copyright on the word ‘American.’” 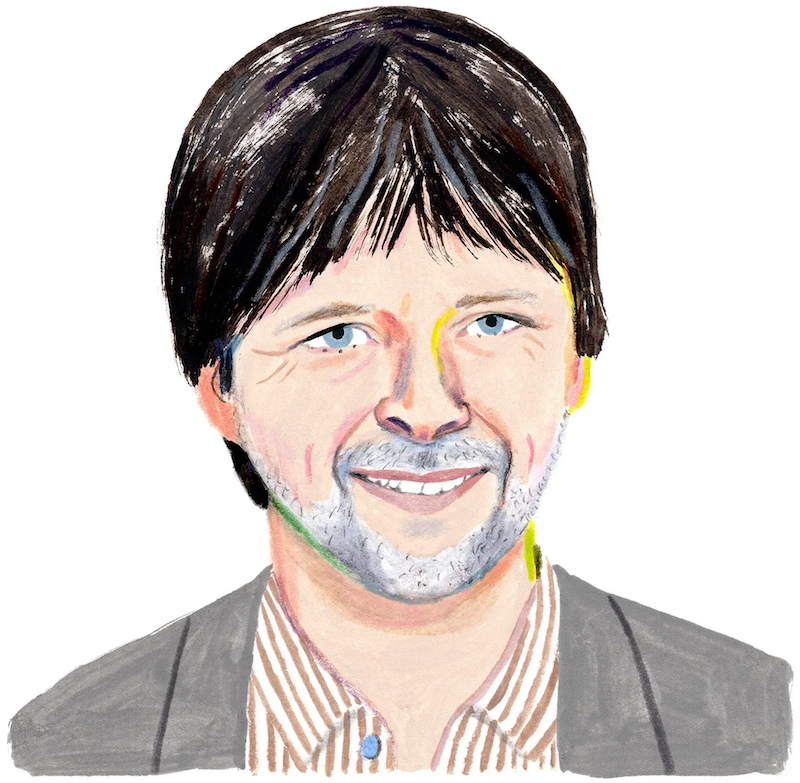 Are you a big reader?

I am. Not as much as I want to be for leisure, because I am constantly reading during the day — my days are 12 and 15 hours long, and therefore by the time I can just sit down and read for pleasure, it’s sort of catch as catch can. But I love the reading I do for my work. People think that film is in some ways the enemy of the word. And it’s not, in our case. We don’t believe in that dialectic whatsoever. In the beginning is the word. And our films reflect that. They are written. They’ve been enormous collaborations that I’ve had with Geoffrey C. Ward and Dayton Duncan over the years, and with my oldest daughter, Sarah Burns, and her husband, David McMahon, who have written the scripts for the films. They’re long ongoing processes. Unlike many cinematic circumstances, the first drafts for these do not come down from Mount Sinai written in stone. They are something that you never stop working on. And our most recent film, “The U.S. and the Holocaust,” written by Geoffrey C. Ward, is a case in point where even after we’d locked the film — which is the semi-technical term in filmmaking for promising your sound editors you won’t touch it anymore — we unlocked it a million times to remove an adjective or to add a qualifying “perhaps” or “some believe,” or whatever it might be, just to be more faithful to the intensely rigorous scholarship we try to attend to with every film.

What books are on your night stand?

I have a pretty big night stand. I have an old chest at the foot of my bed and then my actual night stand, and on it I have poems called “Acquainted With the Night: Insomnia Poems,” edited by Lisa Russ Spaar, a gift from a friend. I’m reading an old esoteric text called “In the Light of Truth,” by Abdruschin. And that follows a good deal of reading I do every single day from Tolstoy’s “A Calendar of Wisdom.” I also have on my bed stand “Anna Karenina,” one of my favorite novels of all time. I have W.E.B. Du Bois’s “Data Portraits,” which has the subtitle “Visualizing Black America.” It’s this incredibly graphic way of understanding American and particularly African American life at the turn of the 20th century. It’s just a wonderful, wonderful book. I have “The Twelve Lives of Alfred Hitchcock,” by Edward White. I am rereading for the third time overall and second time in three years “A Farewell to Arms.” We had done a film that came out a year and a half ago on Ernest Hemingway. And I have “The Lincoln Highway,” by Amor Towles, which I just love. And also — I have now moved to the foot of my bed — his “A Gentleman in Moscow,” which I had read before. I also have Tom Hanks’s book “Uncommon Type,” and I am reading “The Immortal Irishman,” by Timothy Egan. And I’ve got “The Sympathizer,” which I’m trying to pick up and reread again, by Viet Thanh Nguyen. And then, I got about three-quarters of the way through it before something happened production-wise, but I was really into Bruce Springsteen’s “Born to Run.” Then the last book — oh, there’s “The Underground Railroad,” by Colson Whitehead, which I read again — and then I have Kim Stanley Robinson’s “New York 2140,” which is a really wonderful book, imagining a less dystopian future. It does have disasters and climate change, but it also has sort of human adaptability, and it’s really spectacular. And then I have, always, the film critic Andrew Sarris’s “The American Cinema,” which is his sort of rating of directors. He was a subscriber of the French journal Cahiers du Cinéma and their auteur theory. And so, you know, there’s just wonderful takes on, you know, Nicholas Ray and Chaplin and F.W. Murnau. It’s just a wonderful Bible, which I tell you, I have had in my possession since whenever it came out in the late ’60s. And in fact, as a high school student who was dedicated to becoming a filmmaker, I had sort of digested it all. But there was one comment that he made that I memorized about the director Nicholas Ray. He said that Ray — referring to a movie called “Johnny Guitar,” which was written by Philip Yordan — he said, “Yordan set out to attack McCarthyism, but Ray was too delirious to pay any heed as Freudian feminism prevailed over Marxist masochism, and Pirandello transcended polemics.”

Did you just recite that from memory or you had the page open?

Oh, I did it from memory. I’ve already moved out of my bedroom. I’m going to go and check it out.

Yeah, well, here’s what it was. At 17 years old or 16 years old, I had no idea what that meant. And so I really had it as my life’s mission to sort of parse it as if it was some literary holy grail, right? And I remember — I went to Hampshire College in the late summer of 1971 and presented the man who would be my mentor, Jerome Liebling, with this sentence. And he just looked at me like I was out of my mind, got out from behind his desk, lined with photography books and all sorts of things, and took me by the elbow, as he did for the rest of his life, and guided me out of his office and shut me out of his office. I found myself standing in the hallway contemplating suicide. Here I am being told that this sentence that for me was going to unlock the mysteries of this literary universe was, you know, beside the point. But I still love Andrew Sarris, and I still, with great affection, remember that sentence. But I also remember the very earthbound wisdom of just making films and not trying to spend a lot of time theorizing them. I could parse that sentence now, but you don’t want to hear it.

It sounds like you’re a rereader. But are there any classic novels that you only recently read for the first time?

Yeah, I had read some Turgenev in college and I’ve gone back and I’ve been trying to make space to read more of the things that I hadn’t read. I really love Russian literature, it’s just fantastic. I love anything that’s good. My tastes are pretty eclectic, and there’s a big turnover of things. A few months ago I read this great tiny memoir by the poet and novelist Jay Parini, who I know and is also the author of “The Last Station,” a novel of Tolstoy’s last days. His memoir is called “Borges and Me.” He’s a graduate student in Scotland, and he’s been given the task of taking care of Borges, who comes there, and their adventures are, to say the least, as great as any Borges story. It is great. And I didn’t see it on my bookshelf, but it’s very rare that I don’t have Borges’s “Labyrinths,” because when I was in college that book opened my head and my heart like a can opener. I’m never really too far away from that. Another book I’m reading — because I just moved to the kitchen, where I was reading last night — is “The Other Side of Prospect,” which is a book by Nicholas Dawidoff. He sent me the galleys. It’s a fantastic account of his growing up that’s also about the racial divide and delineations of New Haven. Read the full interview at the New York Times.