In Sebastián Lelio’s Adaptation of The Wonder, Stories Can Kill 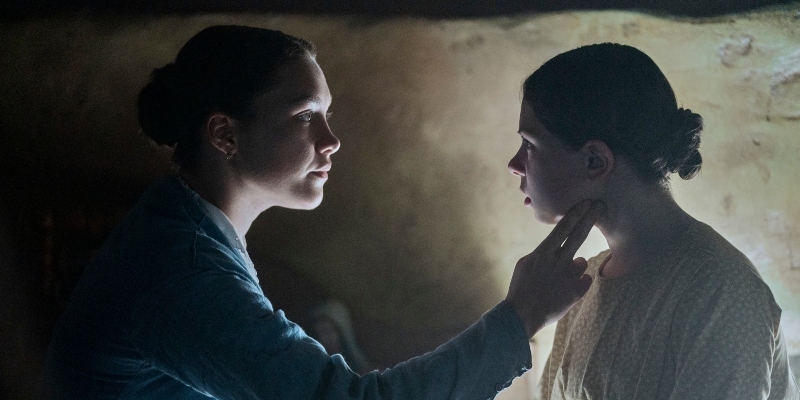 The otherwise excellent adaptation of Emma Donoghue’s novel The Wonder (2016) begins with a slow pan of a cavernous film studio, showing sets perched in scaffolding, camera equipment arrayed in bins and cases, and cables snaking across a hospital-green concrete floor. After the bare-bones opening credits, we hear the voice of Irish actor Niamh Algar: “This is the beginning. The beginning of a film called The Wonder. The people you are about to meet, the characters, believe in their stories with complete devotion. We are nothing without stories. And so we invite you to believe in this one.”

This “it’s only a story about stories” device, which is not part of the book but frames—and at one point, awkwardly interrupts — the film, is a bafflingly terrible intervention by director Sebastián Lelio. Not only is the framing pretentious and unnecessary, as many have noted, but its message is almost entirely at odds with Donoghue’s novel and Lelio’s own film. Yes, The Wonder is only a story, but it is inspired by devastatingly consequential historical events. Yes, some of its characters “believe in their stories with complete devotion,” but some do not, and some of those use the power of stories to malevolent ends. And while filmmakers might like to believe that their audiences “are nothing without stories,” the most urgent message of The Wonder is that underneath the stories we tell ourselves and one another, we are all flesh and blood and bone.

Fortunately, this sequence ends quickly, and the sweeping camera settles on the resolute face of Lib Wright (Florence Pugh), an English nurse en route to Ireland in 1862 — only a few years after the Great Famine has killed an estimated one million Irish by disease and starvation and driven another million to emigrate. In the creaking, dripping darkness of a ship’s cabin, Wright sits at the end of a makeshift table, eating. Her face is set, seemingly expressionless, but Pugh can telegraph multiple emotions with the twitch of a jaw: as Wright chews in the shadows, we see discomfort, mild disgust, and resolution, but no suggestion of resignation or fear. Read the full review at LitHub.