A new original work of short fiction by Kiley Reid, author of the New York Times best seller Such a Fun Age, is a cutting, witty examination of the stories we tell ourselves and others — and what they reveal about who we actually are.

By Kiley Reid and Illustrations By Sofie Birkin 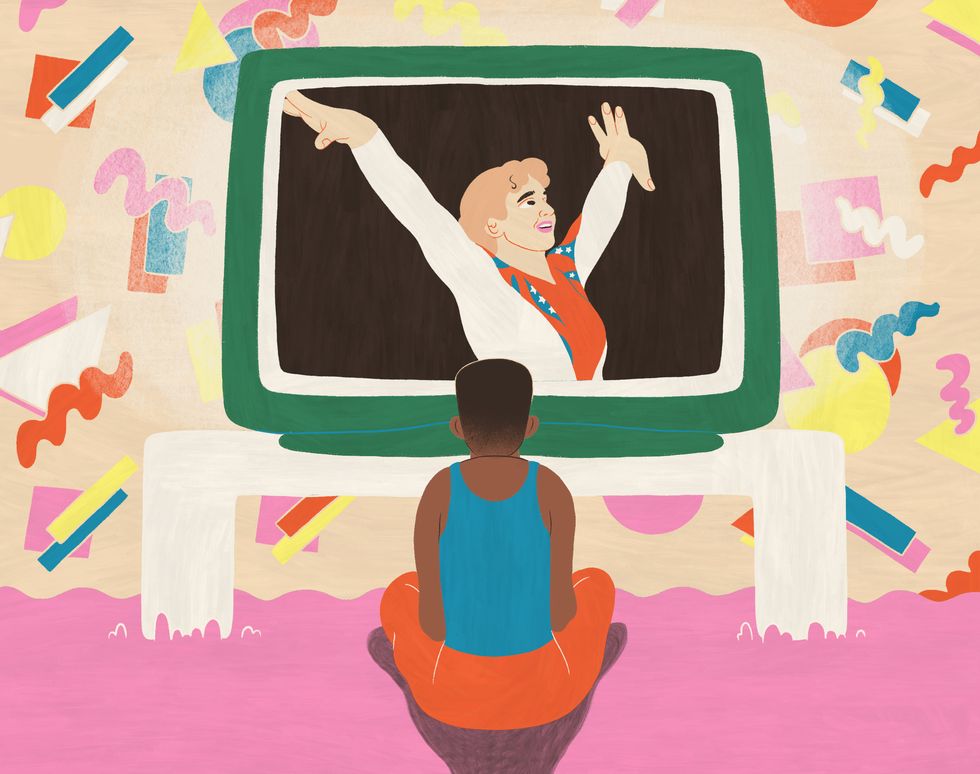 Mark always goes on second dates. After he gets home from the first date, guys his age, in their late 20s, and sometimes men in their early 40s, will text or call him to say hi, that they had a great night, can they do it again sometime, and then they do. There is a story that Mark tells on these first dates that he believes secures the second one, and this linchpin is only dropped when he is truly attracted to the person sitting across from him. It’s a story about a game he played as a child. From 1996 to 1999, Mark’s favorite game to play was called Kerri Strug.

In 1996, the Summer Olympics were held in Atlanta. The United States Women’s Gymnastics team, the Magnificent Seven, competed against Ukraine, Romania, and Russia. In the ’90s, women’s gymnastics was less about power and force and more about calculated, delicate grace on the mat. The Russians continued to dominate, as they had for decades. But on July 23, 1996, the U.S. team held a 0.897 lead. In the final rotation, the Russians went into floor routines and the U.S. went to vault. If the Magnificent Seven collapsed, the Russians could take the gold. At the time, Mark was six and a half years old.

Kerri Strug, a four-foot-eight gymnast from Tucson, Arizona, competed last. Her teammate, Dominique Moceanu, had just fallen twice, earning a poor score of 9.162. Kerri was the last to vault for the United States.

In her first vault, Kerri under-rotated the landing and fell to a seated position, injuring her left ankle. Her coach, Hungarian Béla Károlyi, was broadcast on national television yelling, “Kerri, we need you to go one more time. We need you one more time for the gold. You can do it. You better do it.” When Mark tells this story, he uses an accent for Coach Károlyi, which is subtle but quite good. This makes his dates laugh into their napkins.

On Kerri’s second vault, she stuck the landing. As soon as her arms were raised in completion and she turned to face the judges, she fell to her knees. The crowd exploded, and Mark spilled his mother’s club soda onto the carpet. Coach Károlyi lifted Kerri into his arms as she waved to the crowd. When she stood with the Magnificent Seven to hear the United States’ national anthem, Kerri Strug was the only one not wearing pants. Read the full short story at Marie Claire.